a list of five: how did I get here?

I'm calling this list...HOW DID I GET HERE?

Here are five unusual, surprising, regrettable, or just unexpected musical artists I've seen perform, with some type of explanation which may be vague, defensive, or half-remembered.

1. Richard Marx. I'll start with the most embarrassing show. I think he did an Elvis medley at one point. In my defense, he wrote that Vixen song, "Edge of a Broken Heart," which totally holds up.

2. Cypress Hill. Wedged between Pavement and Sonic Youth at Lollapalooza one year during undergrad. I felt like every song was about pot, the stage design focused on pot. Okay, we got it, you like weed. I guess in their defense, it was hard to fit with the "too cool for school" style of just about every other band on the bill and then they couldn't really outdo the outrageousness of the recently widowed Courtney Love, also performing that day at the place formerly known as Pine Knob, who was picking fights with roadies and talking shit about Kathleen Hanna and pretty clearly strung out.

3.  Rusted Root. Twice. File this under "unexpected" because, well, jam bands. My cousin Cathy took me to see them at some point and, later Nicole and I saw them on the strength of the two songs that had gotten some airplay: "Ecstasy" and "Send Me on My Way," super catchy and fun before they were used to advertise rental car agencies and what not. Anyway, they opened with those two songs, prompting Nicole to say, "Jeez, we can pretty much leave now."

4. Sarah McLachlan. The first Lilith Fair. Seemed like a good idea at the time.

5. Phantom Planet. In Oxford, OH., right after The O.C. blew up. They seemed unsure how to incorporate a super-recognizable and trendy TV theme song into a fairly deep catalogue of solid indie rock. Clearly a weird moment for a good band.
Posted by bdegenaro at 4:11 PM 3 comments:

My fourth adventure from The Global Kitchen took Nicole and I to Korea earlier tonight for a traditional rice bowl dish called bibimbap. We both appreciated the mild flavors--fresh ginger, garlic in moderation, sweetness from apple cider vinegar and a little bit of sugar--and the healthy combination of veggies and other good things that converged in the bibimbap (it's fun to say!). The Korean chili paste gave the meal serious heat and was brilliant with the egg and sprouts. Another keeper. 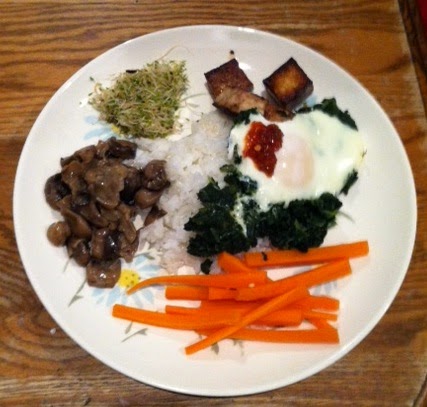 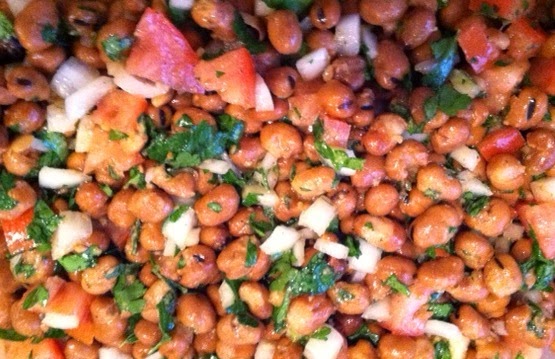 The year we lived there, a lot of cafes and lunch counters in Beirut served salads that combined various kinds of beans (chickpeas, fava beans, whatever) with herbs, veggies, and other fresh things. So interesting to see this very Mediterranean-sounding salad in the "South America" chapter of Global Kitchen. Uruguyan Bean Salad combines fava beans with parsley, onions, tomatoes, and oregano but dresses the combination with olive oil and vinegar. In Lebanon, lemon juice instead of--or in addition to--the vinegar--would likely be used, and I confess I kind of missed the lemony bite in this otherwise tasty concoction. Still, this was easy to whip up in about ten minutes to take with us to a birthday party--a more interesting contribution than a green salad. A keeper--but next time I'm going to include some fresh lemon juice! 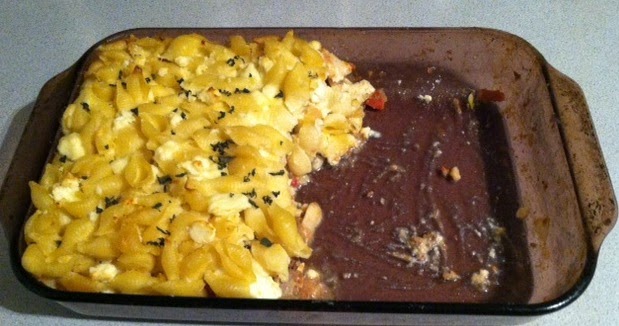 Dish #2 from Global Kitchen: Pastitsio (from the "Eurasia" chapter), a Greek casserole with pasta, feta cheese, tomatoes, onions, ground lamb (I used very lean beef because Nicole's not big on lamb), and milk. This was fun to make: a simple cream sauce from skim milk with a little flour and butter and an equally simple tomato sauce from the meat and tomatoes. Divide pasta among the two sauces, layer, and bake. Like a lot of Greek dishes, unusual flavors mingle--this time cinnamon, garlic, and loads of fresh oregano. We hosted the Berkley Democrats' annual holiday potluck last night and this was a warm thing to serve at a December gathering, though I could imagine making this year-round.

Bill's Grade: A
Nicole's Grade: A+
Posted by bdegenaro at 8:27 AM No comments: 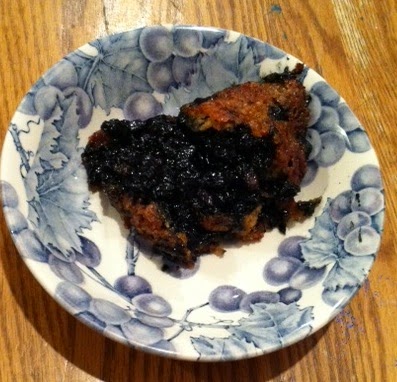 I've fallen for a new cookbook called Global Kitchen, probably because the pictures are so beautiful and the chapters--more or less based on the continents--so varied. My photos aren't going to be anywhere near as gorgeous, but I'm going to try to cook some of the dishes and post some thoughts. No idea how often I'll post. I have no intentions of working my way through the book in order (what fun would that be?).

The "Cooking Light" folks put together Global Kitchen and one thing I love about "CL" is the simplicity. Which leads me to tonight's blueberry cobbler ("North America"), made from not much more than berries, flour, sugar, butter, skim milk, and lemon zest. You could really taste the lemon in every sweet bite. Keeper.

Bill's Grade: B
Nicole's Grade: B+
Posted by bdegenaro at 9:20 PM No comments:

Yesterday after work, a second consecutive swim. My first night I did twenty minutes. Last night, 30. I could really get used to the sensation which perhaps stems from swimming being something different (i.e., I haven't really done it for ten years), but for whatever reason swimming feels rewarding, like an accomplishment--especially increasing my time by ten minutes. I still can't imagine getting to a point of caring much about speed or form but I love the feeling of speeding up my heart rate and then keeping it elevated, going back and forth, back and forth, back and forth. I like that swimming is hard. That's why it feels satisfying to complete thirty minutes.
Posted by bdegenaro at 11:52 AM 1 comment:

So I have hundreds of CDs, vinyl records, and cassettes in my office at home. I bought a lot of music in high school (late 80s, early 90s) when I "followed" particular bands--The Pixies, Smiths, et al--and was likely to use money I earned at Taco Bell to pick up anything they released. I also bought a lot of new music circa 2002-2005 or so, likely for a variety of reasons: I finally had a real job/source of income for the first time in my life after six years of grad school, I heard a lot of great new music on woxy (Oxford, Ohio's now-defunct indie rock station), and my students at Miami U tended to recommend stuff to me. So my CD collection is oddly weighted toward those years: The Gossip, Greenhornes, Libertines, Shins, Soledad Brothers, The Kills, Bloc Party...

Like, well, pretty much everybody, I buy very little new music. I bought i-Tunes versions of the soul singer Kelis' new album "Food," which I love big time; Detroit rapper Danny Brown's irreverent album "Old," which I like; and the new Mashrou'Leila, a Lebanese rock band, and that's pretty much it this year.

Fewer kids experience album art, I guess, but for those who get into the whole vinyl subculture. And I guess, personally, music is less communal, which has something to do with 1) not being 15 anymore, and 2) not teaching at Miami of Ohio anymore. And while free is nice for me, it's not so nice for artists. 2014, folks.
Posted by bdegenaro at 10:39 AM No comments:

I usually work out 3-4 times per week on cardio machines. Thus far--knock on wood, inshallah, spit on the ground, stay away evil eye--I've avoided high blood pressure, cholesterol, sugar problems, the things that allegedly go hand-in-hand with being fat.

Yesterday, though, I swam laps. Ten years ago, when we lived in Ohio, I used to swim almost every morning at the Hamilton YMCA in our neighborhood. I had forgotten how swimming makes your whole body tired and refreshed all at once. Circa 2004 I used to swim for about 45-50 minutes (never kept track of number of laps because I know my speed, form, etc. weren't very good--my goal was always more about elevating my heart rate and maintaining that elevation anyway).

Yesterday I did 20 solid minutes. Going back this afternoon to hopefully do the same. I need a break from the treadmill. Err, literally and figuratively.
Posted by bdegenaro at 9:53 AM 1 comment: 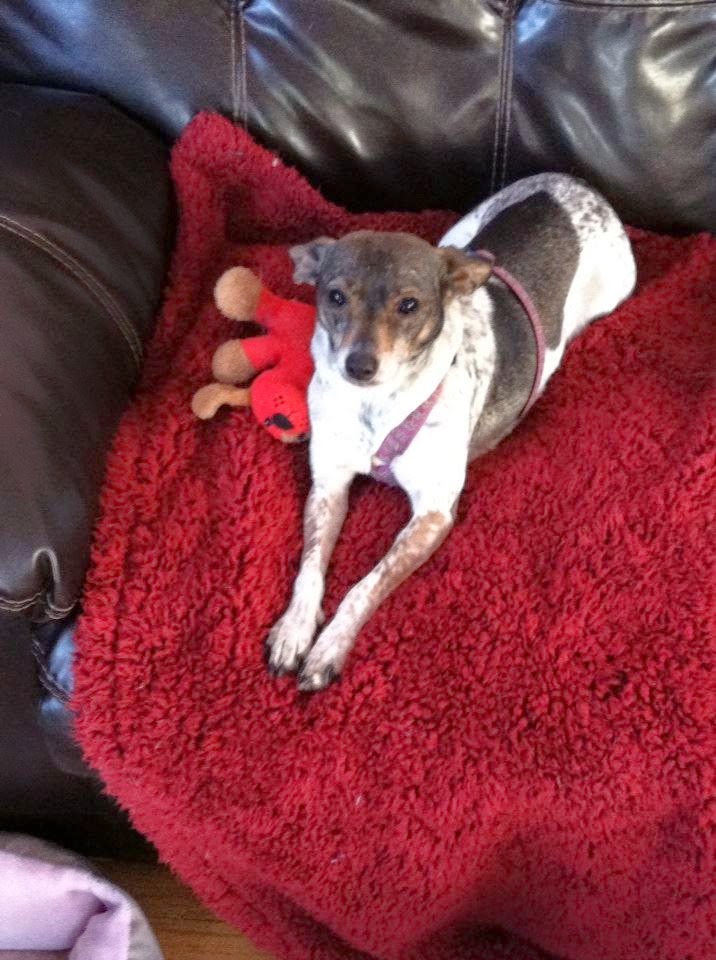